Set Up a Java Dev Environment for Voice Calls

This guide shows how to set up a development environment in five minutes to trigger API requests and start serving Plivo XML to control your call flow. It also shows how to test your code using tunneling software to expose the local dev server to the public internet.

To get started, install Java 1.8 or higher and Plivo’s Java SDK. You probably already have Java installed. In macOS, Linux, or Windows you can check the version by running the command java -version in a terminal window. If you need to update it, download and install it. You should also download and install IntelliJ IDEA.

Now, edit the PlivoVoiceApplication.java file in the src/main/java/com.example.demo/ folder and paste into it this code.

Note: Here, the demo application name is PlivoVoiceApplication.java because the friendly name we provided in Spring Initializr was Plivo Voice.
Note: 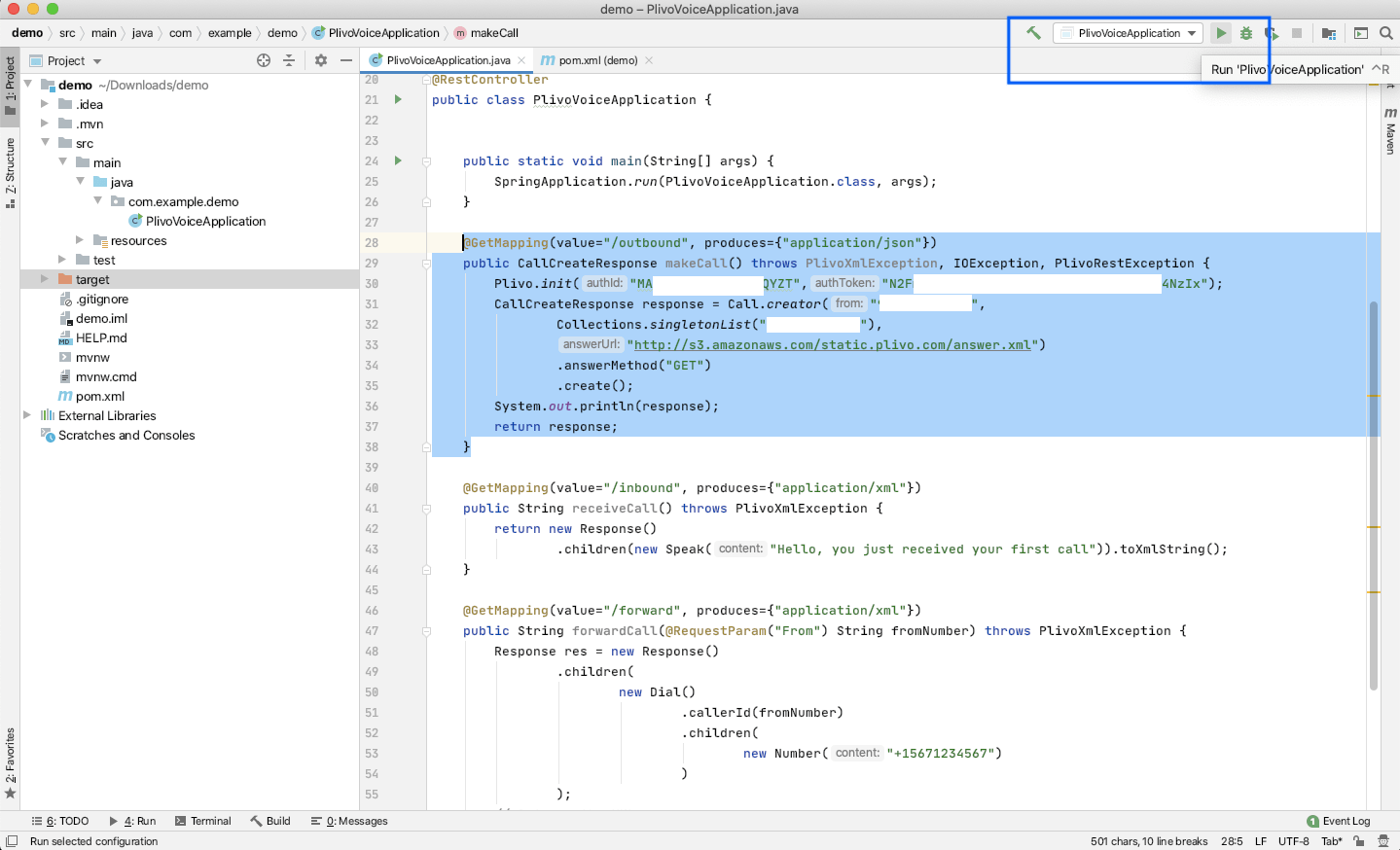 You can follow the same approach to trigger other API requests. Refer to our detailed API reference to see all the API requests available on the Voice API platform.

When you receive a call on a Plivo voice-enabled number, you can control the call flow by declaring an Answer URL for the Plivo application associated with that phone number. Plivo will invoke the Answer URL specified and expect a valid XML response to handle the call.

In addition to requests to the Answer URL, Plivo initiates other HTTP requests to your application server based on specific XML elements in your Answer XML document. Such requests are broadly classified into two categories:

Action URL requests: These requests are typically invoked at the end of an XML element’s execution, and the server expects XML instructions to carry forward the call in response to these requests. This happens, for example, when a caller provides Touch-Tone input during GetInput XML execution.

Callback URL requests: These requests serve as webhooks to pass the application server information about events through the course of an XML element’s execution, such as when a conference participant is muted or unmuted. No XML instructions are expected in response to these requests.

Edit the PlivoVoiceApplication.java file in the src/main/java/com.example.demo/ folder and paste this code into it after the makeCall function block. 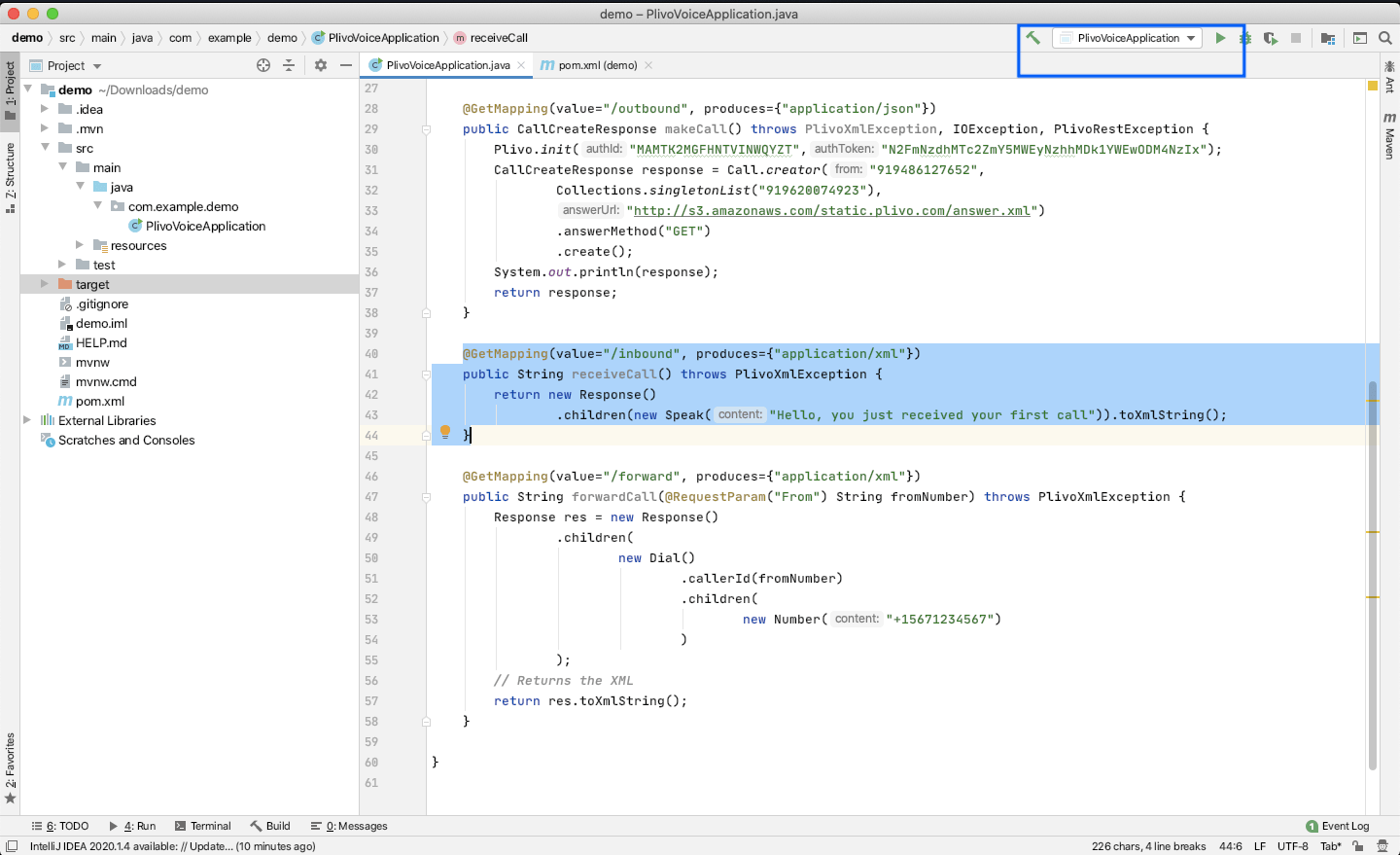 Run the project and you should see your basic server application in action on http://localhost:8080/inbound/.

To serve XML documents, your local server must connect with Plivo API services. For that, we recommend using ngrok, which exposes local servers running behind NATs and firewalls to the public internet over secure tunnels. Using ngrok, you can set webhooks that can talk to the Plivo server.

Install ngrok and run it on the command line, specifying the port that hosts the application on which you want to receive messages (8080 in this case):

This will start the ngrok server on your local server.

Ngrok will display a forwarding link that you can use as a webhook to access your local server over the public network. You should be able to see your basic server application in action at https://<nrgok_URL>/receive_call/.

You can follow the same approach to serve other XML documents to manage call flows. Refer to our detailed XML reference to see all the XML elements available on the Voice API platform.